I left relatively cool Southern California this morning for sweltering Vancouver, British Columbia, which had just been kissed with an extraordinary heatwave that promised to break records over the next week. I would have three days prior to boarding Hapag-Lloyd’s five star expedition cruise ship HANSEATIC (on a ten night cruise to Seward via Victoria, Ketchikan, Wrangell and Haines) to experience a northern heatwave, first hand.

After dealing with the usual weekend melée at the airport (which, by the way has one of the prettiest terminals in the world), I was off in a cab to my friend Glenn Smith’s to begin this latest adventure. The entire beach area of Vancouver’s West End was in preparation for the first of four major fireworks events this summer. Tonight, an estimated 200,000 people were heading to the region, so streets were blocked off and traffic would be even worse than usual.

All photos by and copyright Peter Knego 2009 unless otherwise noted. Please click on images to view larger versions. 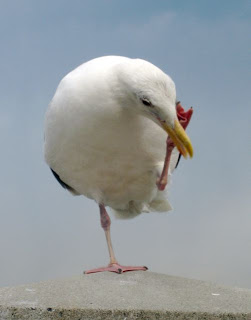 A gull with gall at Vancouver.

As we raced to Brockton Point at Stanley Park to capture the day’s cruise ship sailaways, I heard the familiar, authoritative voice of Princess Cruises VP of PR, Julie Benson on the radio, responding to a media frenzy over a fin whale that was stuck on the bulbous bow of the SAPPHIRE PRINCESS as she arrived this morning. Julie was explaining that Princess took painstaking efforts to avert whale or any marine animal strikes, that the incident was extremely sad and that an investigation into how it occurred was underway. Meanwhile, the whale was towed away this morning and would be given a necropsy before being buried at sea.

Just last month I was on the bridge of SAPPHIRE PRINCESS as she sped on a southbound course through the Inside Passage. It was explained how the watch officers maintain a vigil on whales, dolphins and other mammals to avoid such an encounter. 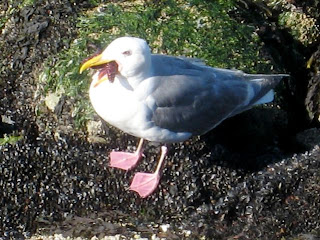 Gull-ping down a starfish at Vancouver.

As we awaited, a gathering of cheeky gulls entertained us with their frolicks, some devouring whole starfish like upwardly mobile twenty-somethings at a sushi bar. 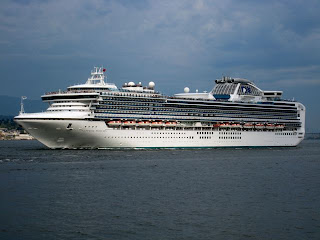 At 4:30 PM, SAPPHIRE PRINCESS backed from her Canada Place East berth and pivoted around, eventually gliding past Brockton Point at 5:00. 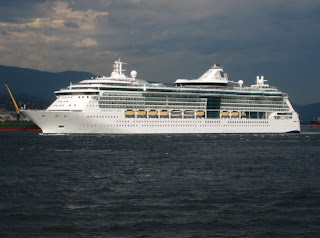 GTS SERENADE OF THE SEAS at Vancouver.

Moments later, she was followed by HAL’s ZUIDERDAM, which left Canada Place West and RCCL’s SERENADE OF THE SEAS, which had simultaneously departed Ballantyne’s. As the SERENADE approached, the skies behind her began to look very ominous. 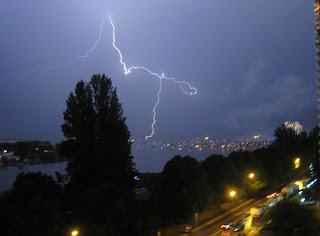 Back on the West End of Vancouver, following dinner at Delilah’s, we stepped out into a steady rain as the skies intermittently lit up. At first we thought perhaps the fireworks were ahead of schedule, then soon realized it was lightning. From Glenn’s terrace, the impressive fireworks were humbly defeated by the natural pyrotechnic display in the skies over False Creek and Stanley Park. 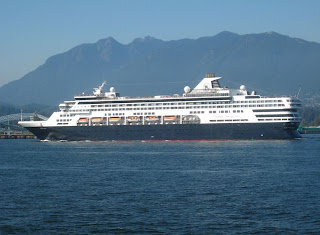 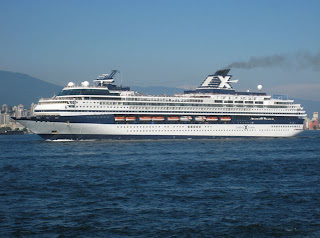 MERCURY in the water: MV CELEBRITY MERCURY at Vancouver. 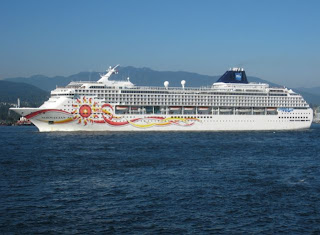 NORWEGIAN SUN, her vivid hull art festively lit by the glaring sun (reminiscent of the classic INDEPENDENCE in her Fugazy era), rounded off the day’s departures. 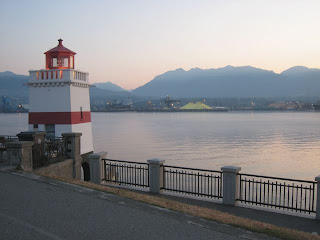 A painfully early morning awakening at 4:30 provided enough time to be at Brockton Point for the arrival of Peaceboat’s gorgeous, 1965-built SS OCEANIC. The former Home Lines beauty is making her maiden visit to the Pacific West Coast on her first world cruise for Japanese-based Peaceboat Organization.

She was challenged early on in this voyage after arriving in New York with a tiny hole in her hull that required dry docking and ca
used a week’s delay in her schedule. I was perhaps the only benefactor from this unfortunate event as it allowed me a chance to visit the ship during my Vancouver stay. 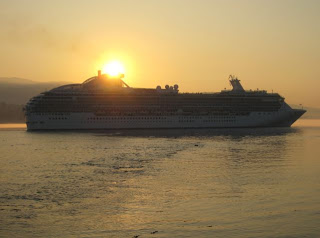 CORAL PRINCESS beat the OCEANIC to the Lion’s Gate Bridge at 6:15 just as the sun rose over North Vancouver. The lighting was not terribly cooperative but it did help set the mood for OCEANIC, which followed the Princess ship at 6:45. Her beautifully sculpted lines were such a soothing site, especially in the mountainous backdrop of Vancouver, versus an oil-stained Indian beach. 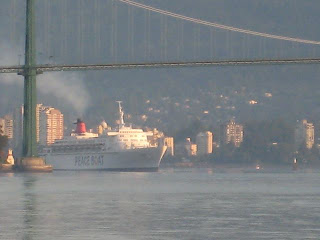 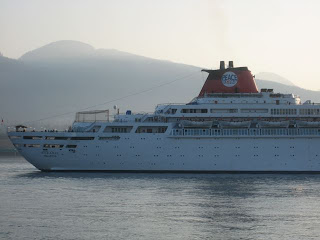 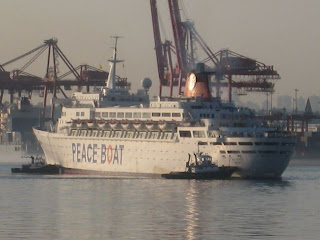 Two tugs aid in the turnabout.

OCEANIC is in a long queue of ships destined to be fully covered in the Decked! blogspot but here is a brief preview of some of her highlights. 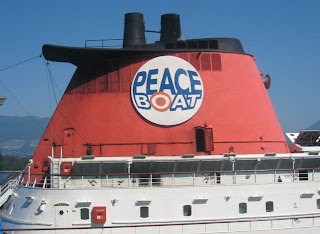 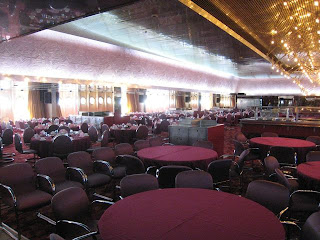 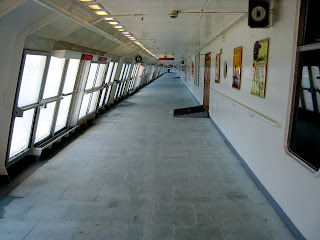 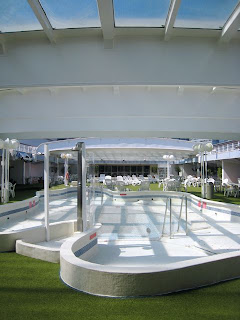 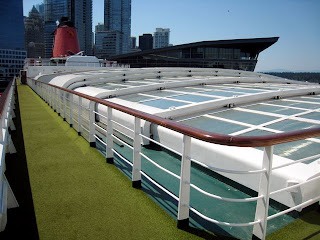 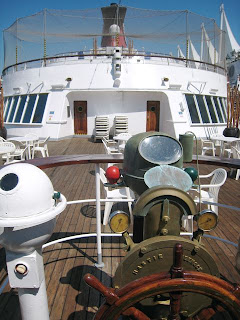 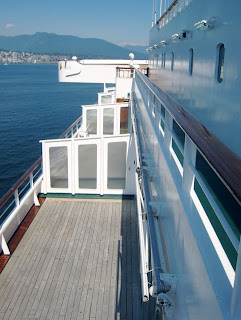 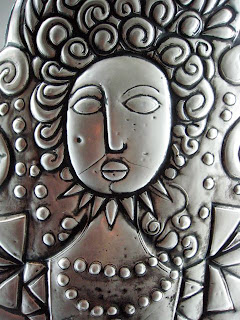 I spent some four hours documenting the ship, covering everything from her original Italian stairtower artwork to the Lido area, all public rooms and the outer passenger decks. Since the ship was going through a battery of Canadian Coast Guard tests, I did not have a chance to say hello to the good Captain Antonellos and ask for permission to visit the fo’c’sle and bridge but hopefully there will be another chance in the future. In the meantime, I was really happy to hear that this friendly master (former Chandris, Premier and Imperial Majesty) from Kefalonia was back in charge. I sailed with him on OCEANIC and REGAL EMPRESS and he was our host in Freeport during visits to the BIG RED BOATS II (ex EUGENIO C) and III (ex TRANSVAAL CASTLE, SA VAAL, FESTIVALE, ISLANDBREEZE) prior to their sale to the Indian shipbreakers. 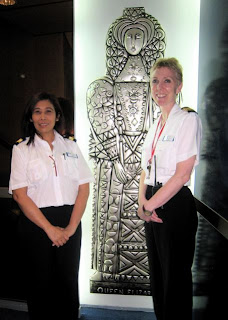 Lou (left), Queen Elizabeth I and Shelly (right) on board SS OCEANIC.

Amazingly, as I was documenting the Luzzati hammered metal stairtower portrait of Queen Elizabeth, Lou and Shelly from the REGAL EMPRESS stopped to say hello. These lovely ladies have happily gone on to another classic liner following the REGAL E’s retirement earlier this year. Ironically, the ship had just beached at Alang under the name REGAL TMPRESS the prior day.

After my exhaustive documentation of OCEANIC, I headed back to the West End to join Glenn and prepare this blog.

We were up again at a god-awful hour to catch the arrival of my home for the next ten nights, Hapag-Lloyd’s smart little HANSEATIC. 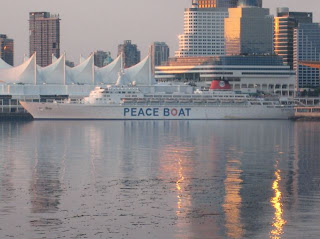 En route to Prospect Point, we stopped at Brockton Point to discover OCEANIC still at her Vancouver berth. The former Italian beauty was scheduled to sail last night at 11:00 PM… 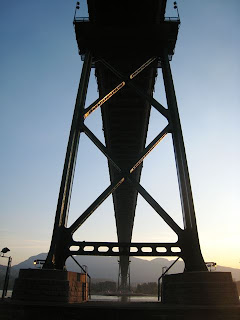 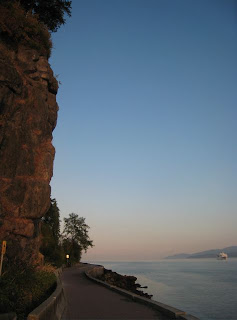 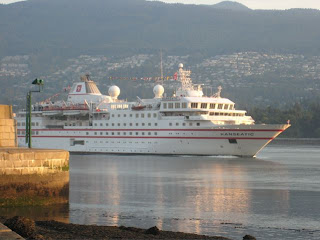 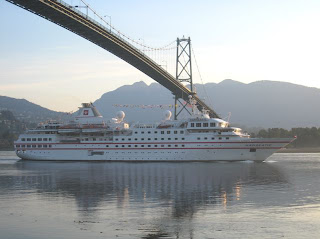 Just as I reached Prospect Point, a speedy little white blip on the horizon morphed into HANSEATIC. I captured her approach, then ran to the east side of the Lion’s Gate Bridge for an unfortunately back-lit view of her passing by.

Back at Glenn’s, we checked the Vancouver Pilot’s website to find OCEANIC scheduled to depart at 2:00 PM. Returning to Stanley Park and ever toasty Brockton Point, we watched as the ship loosened her lines from Canada Place West and moved slowly out to…wait a minute…Canada Place North. The old girl was not leaving town, just moving down the block…. 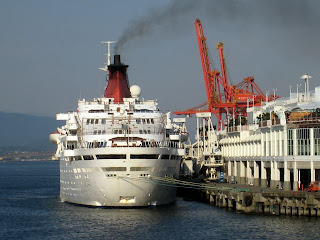 With the ship once again secured to her Vancouver berth, we headed off to lunch before Glenn safely delivered me to Canada Place to board the HANSEATIC, where I was told OCEANIC has been delayed due to engine trouble. She was scheduled to depart at an as-of-yet-undesignated time on Wednesday, July 29. Here’s to a quick fix and smoother seas for this classic lady.

Huge thanks to the ever-kind and gracious Glenn Smith, to whom I dedicate this short blog…

Ocean Liner Fittings, Furniture and Art For Sale at MidShipCentury.com

Peter Knego Videos Link: ON THE ROAD TO ALANG and THE WORLD’s PASSENGER FLEET, Volume Nine

This site uses Akismet to reduce spam. Learn how your comment data is processed.