When The History Channel contacted me in search of an aged cruise ship for its “Life After People” series, I gave them a short list to consider. With access, timing and budget limitations, by far the best candidate was the 1955-built MV FAITHFUL (ex WAPPEN VON HAMBURG, DELOS, POLAR STAR, PACIFIC STAR, XANADU, EXPEX), currently located in Rio Vista, some 60 miles southwest of Sacramento, California.

Please click on image to open a larger version. All photos by and copyright Peter Knego 2009 unless otherwise noted.Please see bottom of page for links to the ship’s full history, a virtual tour and views of her at Alameda. 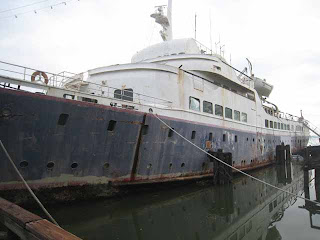 To be quite honest, I thought I would never see this stately, largely forgotten vessel again after her well-publicized languish at Alameda following a failed attempt to convert her into a luxury yacht. Her story since my 2003 visit and on line tour while she was moored at the SouthWest Marine shipyard in Terminal Island (across from San Pedro in the Port of Los Angeles) has been filled with adventure, speculation and some shadowy dealings. 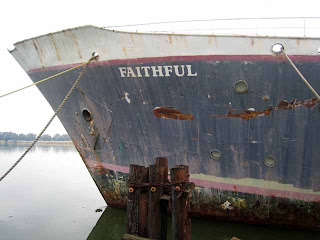 Raked on the river.

After a risky tow from Terminal Island into the open Pacific to Alameda in September of 2005, the ship was reportedly abandoned once the yacht conversion plans were shelved. As the fading FAITHFUL languished alongside a rotting quay, some claimed she was occupied by vagrants and drug addicts looking for shelter and a place to get stoned. Meanwhile, rain water was seeping down into her untended machinery spaces and stirring concerns that the ship was in danger of sinking. Further, and most alarmingly, one of the parties claiming to be her owner had the ship listed for sale on several occasions only to reputedly take rather large deposits and disappear from the scene.

Finally, the Alameda City Attorney’s office served the FAITHFUL notice in January of 2008. Likely options included scrapping or scuttling as a reef but salvation came via a Rio Vista-based businessman who safely towed her to the Sacramento River Delta to begin yet another chapter in her long, checkered saga. She has since been resold and her new owners were kind enough to grant us access for this episode of the popular series, which has a travel-related theme. 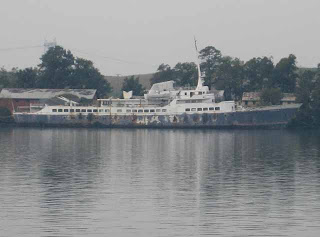 Even from a distance, and under layers of cosmetic decay, fine lines are fine lines.

A most fulfilling day began at 5:00 AM with a mad rush to Burbank Airport and a flight to Sacramento to then hop into a rental car and make another dash through the California lowlands to Rio Vista. Amazingly, no missed turns or traffic interceded with my timely progress and I was early enough to take a quick detour to an RV campground across the river where I could get a shot or two of the diminutive former liner and cruise ship in her new freshwater surroundings. 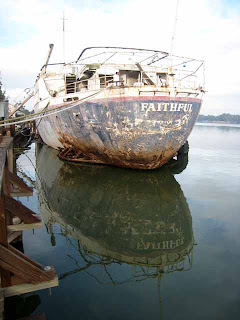 Double FAITH on the Sacramento River.

It’s been fifteen years since FAITHFUL’s hull was painted dark blue, topped with a red pin-stripe (not unlike the livery of now defunct Sun Line’s ships). Years of cosmetic neglect and scrapes with pylons, tow lines and even derelict barges lashed to her side have taken their toll on the fading blue. Streaks of rust and encrustation by barnacles and moss have given her hull the perfect patina for this “abandoned” ship episode. Still, the ship’s dashing lines and perfect proportions are a sight for sore eyes in this era of modular, wedge-like marine architecture.

At 11:30, I arrived at our rendezvous point, the historic Foster’s Big Horn on Rio Vista’s Main Street. It was hard to believe I was midway between the San Francisco Bay Area and Sacramento and not somewhere along the Mississippi, with the town’s facades a quaint mixture of Victorian, Mission, Deco and even MidCentury. There was a post office, gas station, several bars and restaurants, churches, a bank or two, as well as antique and thrift stores — much as one would find in a river town in, say, Indiana.

My non red meat-consuming, cruelty-free sensibilities were shattered upon entering the Big Horn, where an entire reserve of deer and antelope heads loomed over a long bar. In the main dining area, hovering over a sea of plaid shirts and baseball caps, more exotic taxidermy included an elephant, giraffe, lions, a complete jaguar, buffalos, and e
ven a few massive fish. Perhaps in another dimension, exotic animals are grazing under the heads of some 300 well-preserved taxidermists and game hunters (For a fair counter to my rant and more information about Foster’s Big Horn, please click here). 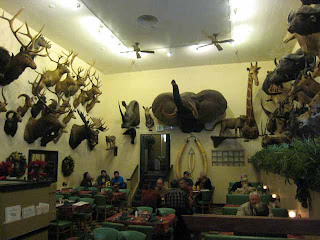 Soon, The History Channel crew and the ship’s owner arrived. For the next forty five minutes or so, I slurped copious amounts of iced tea as we talked about the FAITHFUL and the shoot. 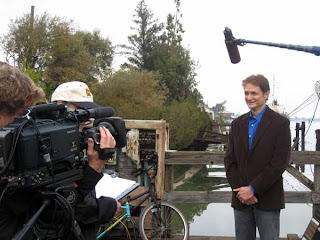 At 1:30, we were on site and by 2:00, the interviewing and on-camera questions had begun. Of course, no matter how well one knows the subject at hand, the brain tends to turn to mush with the flick of the camera’s “on” switch. Hopefully, with director/writer Tim Evan’s patient prompting, I was able to impart some useable commentary on the history of the former XANADU, cruising in Alaska, life on board a modern cruise ship and just how a ship would decay should man suddenly vanish from the face of the earth. 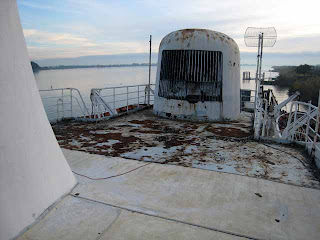 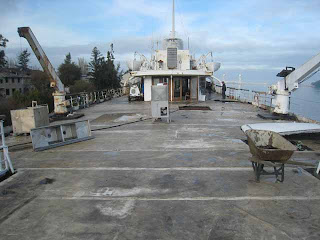 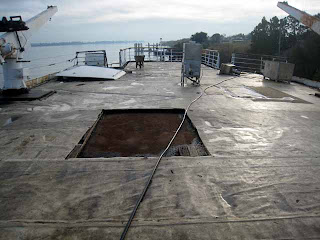 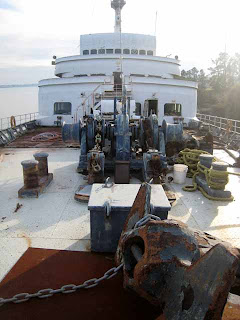 What I did not anticipate was the utterly delightful hour or two that followed. Externally, FAITHFUL looks the part of an abandoned cruise ship but once on board, things had changed considerably for the better since my last visit in 2003. Yes, there is much work to be done but I was impressed, if not downright shocked, to see that her worn wooden decking is being gradually removed so the steelwork can be cleaned, primed and repainted. 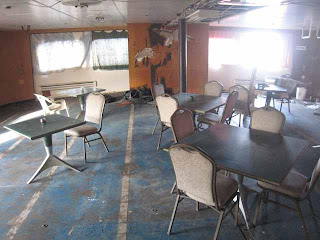 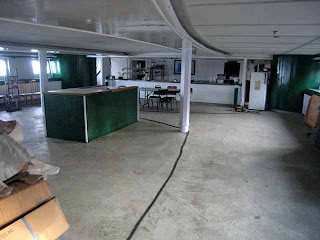 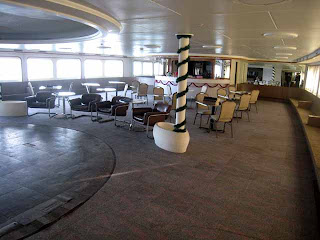 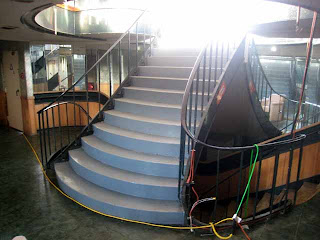 Internally, I had expected a horror show after the reports of vandalizing in Alameda (which were apparently false or highly exaggerated). Even the soiled linens and litter that were ever-present during my 2003 visit had vanished. Cleaning and restoration has been ongoing in all the public rooms, probably to the great disappointment of the History Channel crew, whose goal was to shoot decay. 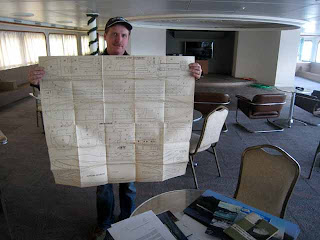 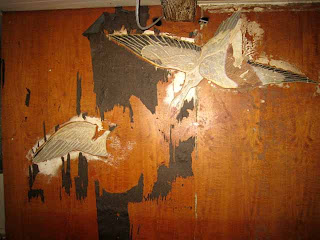 Christopher Willson, the FAITHFUL’s current owner, could not have been more hospitable. His enthusiasm for the ship is infectious and has produced tangibly positive results. Glorious hardwood paneling is being restored after years of concealment under wall paper and paint. 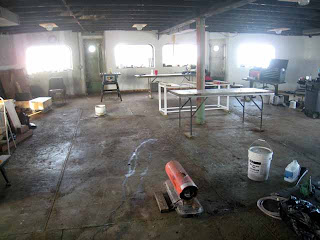 Former cabin space on forward A Deck, converted in the 1990’s to a chapel and meeting hall, now being restored.

The neglected space carved out of the forward A Deck cabins is being properly cleaned and renovated. Furnishings have been dusted off and set up in various spaces. A generator now supplies light and power to parts of the vessel that have been “dead” for years or even decades. 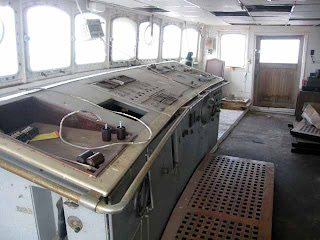 Future options are being explored, including a possible dry docking, further renovation and restoration. Mr. Wilson hopes to be able to use the ship as a floating convention center, museum and/or bed and breakfast. Unlike larger ships, she is of a manageable size, so perhaps there is a bright future ahead for this most deserving and extraordinary little liner.

Time on board was very limited as I had a 6:50 PM flight to catch from Sacramento but I hope to return again soon to explore and properly redocument FAITHFUL for an updated Decked! tour.

MaritimeMatters’ full history and tour of the former MV FAITHFUL posted in 2003.

In And Out Of The Fog Blog — includes views of MV FAITHFUL at Alameda in January 2008.

This site uses Akismet to reduce spam. Learn how your comment data is processed.